Deprecated: Function get_magic_quotes_runtime() is deprecated in /usr/local/php74/pear/Cache/Lite.php on line 757
 Creating a Series in Today’s World of Digital Interaction 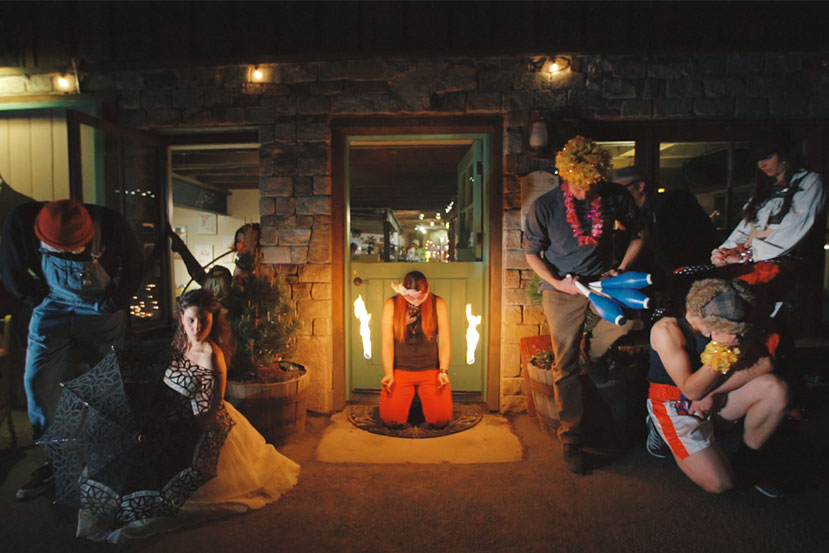 When I started Viscerah Studio, I made it a priority to create more content simply for people to enjoy. Creating music videos and working with artists is an extremely natural process for us, and we’ve been doing it since we’ve started in this business. The format allows for endless creativity and diverse interpretations. A long time favorite seemed like natural starting place for us when I began to look at what sort of projects we’d like to share with the world.

What would we like to make and watch?
What would allow our creativity to run wild, time and time again?

There’s an amazing little coffee shop located underground, on a back alley near the river in downtown Truckee, CA called Dark Horse Coffee Roasters. The walls are lined with stone, fashioned with amazing local art, and garnished with the rustic furniture, it all so quaintly fits right in with Truckee’s history of black sheep and misfits. Their small batch coffee, sourced from around the world, is roasted right before your eyes, and they’ll chat with you for hours, never too cool or secretive to share their craft.

I held a beautiful office studio downtown for a while in Art Obsessions, a fine art gallery located next door to Dark Horse, when they expanded from their San Diego location. I’d been frequenting the coffee shop since they moved to Truckee in 2014, but once I was next door every afternoon, I started to get to know their crew and what they were all about. 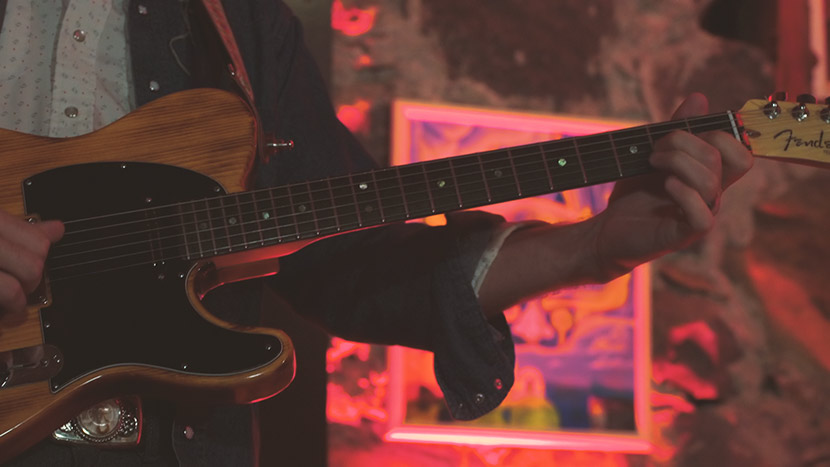 Music in Dark Horse was a very natural progression, as Drew dabbles in a handful of instruments and Truckee has one of the most creative communities out there. The shop was underground, surrounded by stone and concrete, and closed swiftly at 5PM, making it the perfect place to jam out and speak with the muse after hours. Drew started opening the space to more friends of the shop after the doors closed, and it began to leak over to business hours, when musicians would start to play a little solo set on Sunday afternoons. 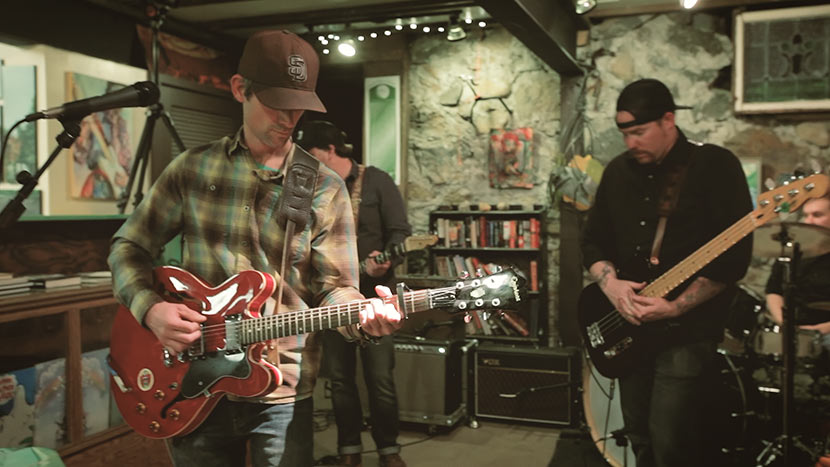 One afternoon, Drew and I were talking about how awesome it would to start having larger acts play and transform the coffee shop to an intimate music venue. There’s great energy, rich history, and unique ambiance; the perfect concoction to make something incredible. Space was an obvious concern, and we began to brainstorm ways we could make this happen in spite of the space constrictions. That’s the exact moment inspiration struck me.

“Why don’t we stream it to YouTube? We could sell a small number of highly sought after tickets and open the show up to online audiences. Let’s film it like a music video, building a theme with the band, transforming the coffee shop into our set. We’ll film it with the gimbals to move freely throughout the space and cut it live in the back room so there’s no post. Let’s make a live music video! We can interview the bands after, have the both live and online audience ask the artists questions, and create this really warm, interactive experience, like MTV unplugged, but with characters and a story tied to the music.”

We were sold. We began starting to play with the idea and asked a few artists in the area if they’d be interested in being our “pilot” episode. Todd Wees and Morgan Hargrave fell in love with the idea and not only did their group, Forget The Roses, want to be a part of it, they themselves would like to be involved in making Dark Horse After Hours a reality.

I didn’t even know if this was going to work, so for the first one, we did it with all friends and I filmed it all solo with just a couple takes and a little movie magic. The song, ADD, was a banger about drinkin’ too much coffee and losin’ your shit, so it was quite fitting, and no one was really bothered that we played that one twice.

The response was awesome as we were shared throughout the area, and snagged an interview on Local Lowdown, 101.5 Truckee Tahoe Radio. There was no shortage of willing acts now and we wanted to continue to build steam by getting on someone with local roots but with a fanbase throughout the states. Dead Winter Carpenters loved the idea and had a song off their new album they thought would be perfect.

Continuing to find our own style and vision with the series, I assembled a team of friends who are handy behind the lens and incorporated a completely different look than the first video we filmed. It was a pretty packed house, as we had to be pretty secretive anyways about the show, because DWC tickets around Truckee go like the new Xbox at Walmart on Black Friday; there were people hanging out in the alley, listening through the door! The show was great and I love how the change of set and diverse camera angles moving throughout the band immersed you. The interview was pure gold and had everyone in the house laughing incessantly.

The third episode was my baby. I now knew where I wanted to go with this series and how we could make this an entirely unique experience for both audiences. Sneaky Creatures had voiced their interest in what we were creating and their vaudeville psychedelic funk sparked my imagination. Flipping through the channels, I landed on the Circus Circus scene from Fear and Loathing in Las Vegas and the ether induced madness that Hunter S Thompson endures. The camera moves through the scene going dutch (rolling ~45 degrees) in both directions. I loved the unease this brings to the viewer, and how it made the cast of trippy clowns even weirder. I envisioned the band awakening these vaudeville characters and luring them in to the scene, creating entirely unique reveal for each audience. 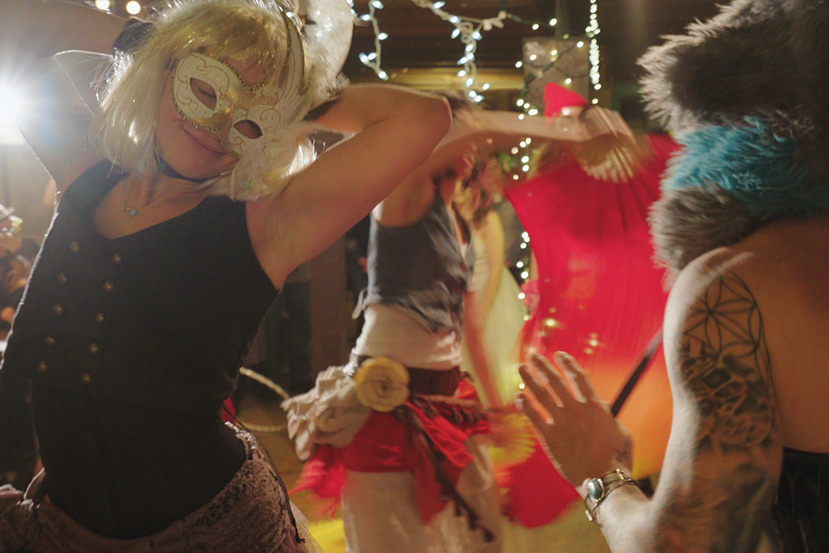 The episode starts with all the characters outside sleeping in the dark alley, fire bouncing from the torches of the fireeater. The audience inside is there with the band, they see the artists begin to play, and they have a moment to digest the intricacy and lunacy of the set we created. The camera follows the characters outside as the band wakes our cast of crazies and they begin to stretch and come to wits with their new bodies. Quickly the music catches their attention and they coagulate around the door, looking to see what has awaken them. The camera tracks through the wall at the exact moment the creatures open the door and disperse throughout the set. 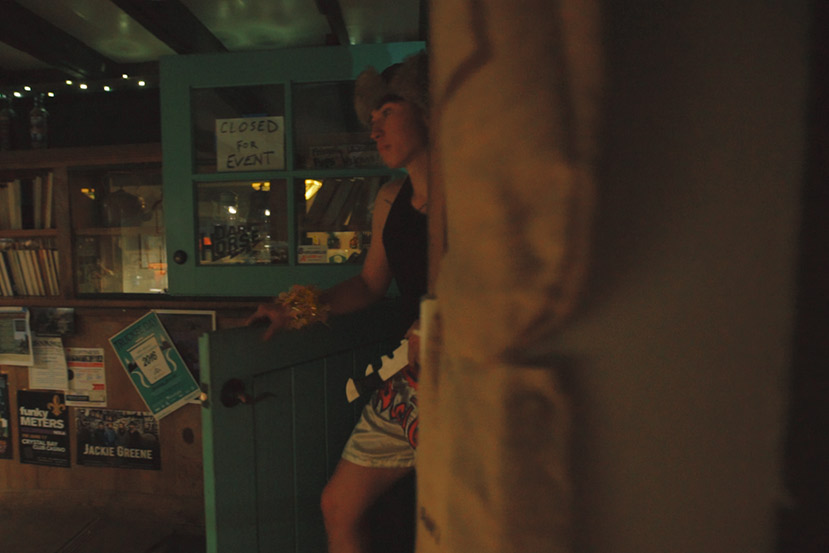 I pulled this off by starting the show both operating the main camera and directing the action, handing off the camera through the window to cinematographer Dan Danzberger. I grabbed the controller after I climbed through the window and crept craftily behind Dan, allowing him to catch all the action without catching me in frame. From the shadows, I operated the camera wirelessly and rolled it throughout the scene to induce this “fly on the wall” feel to the audience, and the crew absolutely nailed our 10 minute take, seamlessly transitioning between the songs.

Having found our direction and shown there’s obvious interest in the series, we’ve begun planning the next steps towards our first full length season of Dark Horse After Hours, starting with our Kickstarter, releasing in May, to raise money for production costs. After the Kickstarter campaign, we will open the project up for sponsorship, looking to find a headline sponsor, and continue to bring in larger acts as they pass through this area on their tours.

I’m excited for the future of Dark Horse After Hours; I feel that the unique experience we’ve built has an opportunity to create something special for audiences across the globe. It gives fans a new way to experience their favorite artists; to connect to their favorite songs in an entirely new manner. It’s fun, extremely creative, and the connection we’ve built between the artists and audiences has far exceeded my initial expectations. I’m grateful for everything that brought us here and for the amazing fruit of my continued pursuit. 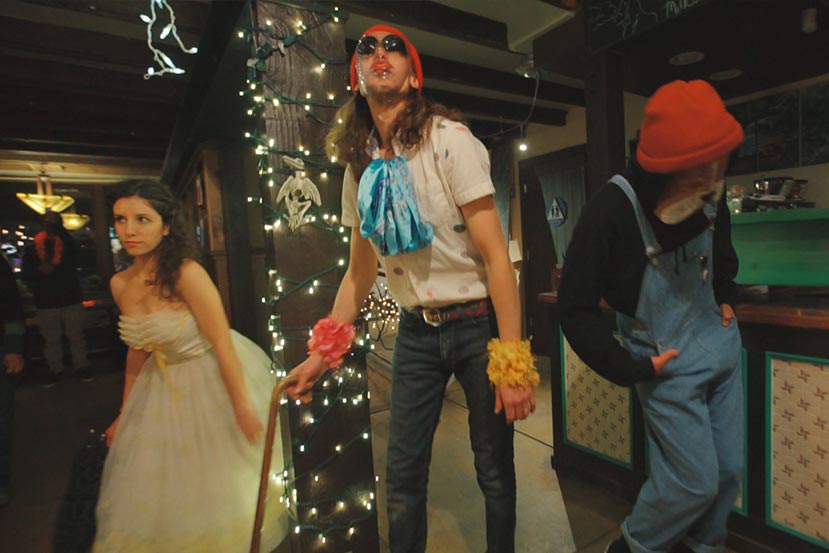 Check out more from the series over on the Dark Horse After Hours website, or on our Work page!

Join our newsletter for the latest updates and marketing tips

Give us a shout

Viscerah has been able to creatively pursue my vision in the way I articulate it and assist in developing a healthy social media presence. Evan and his dedicated team have worked alongside me in constructing overall brand awareness with fine detail and accountability.

Evan has an amazing ability to understand another's vision and at the same time layer in his own surprising interpretation using his own extremely versatile style. Evan relishes a challenge. Working with him feels easy, spontaneous and joyful. He is forever my 'go to' guy when it comes to all projects involving filmmaking.

Evan was the perfect addition to our Yoga Retreat. He joined in on all the activities to capture all footage requested and fit right in with all the yogis of all ages! His video creations were amazing!! Exceeded all expectation. Highly recommend Evan! I hope to find other projects for him so I can have another opportunity to work with him.

It was really dope working with people who actually understand our culture. I felt like I was able to get genuine feedback from dudes who didn't need to be told what's cool.